I am still digesting my experience at SACH, but I will attempt to describe my two-week medical internship in a concise post.

The first thing I heard was laughter as I walked through the gates and into a bustling scene at the Children’s Home. Once inside, I was met by a smiling Delice who invited me to join her as she played with new-aged Legos. Delice is a 5-year-old girl from Rwanda, and the first of many children I met in the home with congenital heart disease. Later in the day I met Lorna, my roommate and fellow medical intern. Lorna guided me around the hospital for an embarrassingly long time until I got my bearings. We spent a majority of my first day in the Cath Lab. Tal, a technician, narrated each procedure in great detail and patiently answered the insanely long list of questions my brain generated. It was in the Cath Lab on day one where I met Shaida, a 6-year-old girl from Kurdistan.

Shaida’s surgery was the first cardiac surgery I shadowed. After anesthesia induction, the anesthesiologist placed a stool behind the operating table for me and Lorna to closely observe her surgery. I stepped on the stool and stood there— with my gaze fixated at the surgeon’s unwavering precision— for hours. I’m still dumbfounded about what I was able to witness. It’s hard to articulate the experience, but I will say this: watching open heart surgery is a sublime reminder of the wonders of life and the capacity for human innovation. Dr. Lior Sasson kindly narrated the surgery for us, while maintaining laser-like focus on Shaida. Alex, an anesthesiology fellow from Tanzania, answered our lingering questions about Shaida’s surgery. He soon became a mentor figure for us. I am incredibly thankful for the guidance and patience that Alex extended to me both inside and outside the hospital. I admire his dedication to his craft and his willingness to share his field with us future physicians. (Thanks, Alex!)

Not surprisingly, Shaida awoke in the ICU in extreme pain. In attempt to distract her, I took out the iPad to look for children’s shows dubbed in Kurdish. It felt like I had searched all of YouTube before thankfully finding a collection of Mr. Bean episodes dubbed in her language; to me, this was tangible evidence of the Kurdish repression that I had only read about. I stayed by Shaida’s side as she watched Mr. Bean, belly-laughing as he created chaos around him. I share this anecdote because I want to emphasize that the learning experience at SACH extends far beyond traditional medicine— it dips frequently into the cultural and ethical realms. When shadowing Dr. Akiva Tamir at the Palestinian clinic, I witnessed him literally grappling between choosing life and death. One child had already lived through multiple procedures that were proving ineffective. Paradoxically, the more ethical choice would be to let this young boy live the rest of his short life outside of the hospital: to choose quality of life over quantity of life. Dr. Tamir pulled Lorna and me aside to explain his careful thought process. It amazed me to watch a human poignantly tasked to “play God.” 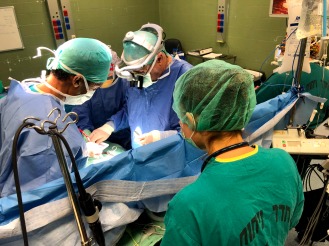 On my last day in Israel, Lorna and I walked from the Tel Aviv Museum of Art to the Children’s Home to soak in the last bit of Tel Aviv before I left. I stopped at the hospital for one last goodbye: Delice—whose surgery was scheduled for Sunday! Later at the house, I was greeted by Shaida who had returned from the hospital. I sat on the couch to unwind and began processing my experience at SACH. I paused to soak in the beautifully unconventional scene: women and children from Tanzania, the Solomon Islands, Ethiopia, Kurdistan, Rwanda, Uzbekistan gathered together around the long dining room tables.

Over the course of two weeks, I established meaningful connections with many children and mothers living in the house. As I write this, I don’t think I have fully processed what I was given the opportunity to witness. I want to thank the children, mothers, doctors, nurses, and staff at SACH for sharing this experience with me. I would absolutely recommend checking out SACH’s medical internship. SACH’s mission is substantial and sustainable. I particularly admire that SACH provides fellowships to foreign doctors in order to accomplish its long-term goal of replacing foreign care with the care of local physicians and medical personnel.

Until next time, SACH!